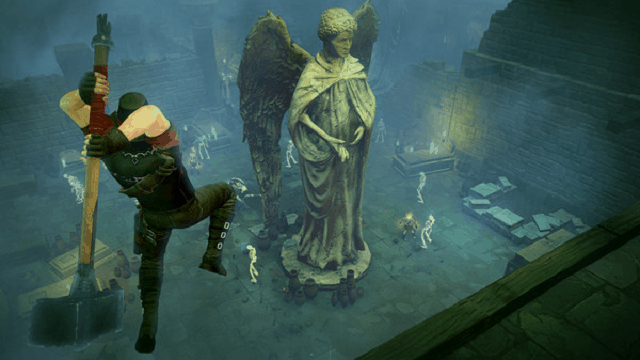 Diablo, an RPG hack and slash video game, is a top action-packed game. In terms of engagement and gameplay, not many video games can match Diablo.

It has incredible mechanics and smooth controls. There are also numerous quests waiting for you to explore. And while playing, you will have the chance to choose your preferred character. You can either go for a warrior, rogue, or sorcerer. Whatever figure you settle for, prepare your mind and hands for a fierce battle against the lord of terror.

So, Diablo is a fantastic game. There’s no doubt about that. But you can’t continue to play the same game repeatedly so, if you are seeking top games like Diablo to while away time, here are some great options for you.

For those seeking a Diablo-like game with diverse strategic movement mechanics, Eitr is a wise choice. You will find a range of weapons to attack and overpower your enemies. Arrow strikes are super accurate, making the game a joy to play. As the shieldmaiden, you can use the various weapons at your disposal to destroy the nightmarish creates, and other profane warriors that occupy the nine realms.

There are also rewards for your performance on the battlefield, which involves claiming the loots of fallen enemies as you progress through the various realms. Eitr is a game that will keep you hooked on your PC screen for hours, so ensure you have no other important task at hand before you hit the start button.

The Book of Demons is another exceptional game that compares to Diablo. It’s of the hack and slash deckbuilding hybrid with a difference. You will be made to wield cards, instead of weapons to slay the enemies. And you may wonder if it’s a card game. Well, the answer is No! The Book of Demons is more than that. The cards give you access to tons of features that will make you combat-ready. These include skills, spells, and other items.

In this game, you can decide how long each quest should be. It also boasts a superior fight mechanics and movement that sets it apart. The game also runs seamlessly on Windows operating system.

If you are seeking a game that can replace Diablo, the first two things that will endear you to any alternative are the gameplay and combat. Others, like graphical quality, might come in afterward. And that’s where Killsquad stands out. It’s a game you will enjoy playing all day long. So, if you are ready to join the Killsquad and become a bounty hunter, then hit the start button right away!

Your galaxy is experiencing chaos, and everyone on the planet has gone rogue. But some see profit in the rowdy planet. Now, a squad has been assembled, which you will be joining if you accept the mission, but they have one aim. That is to gather whatever bounty and riches are left. This RPG game can also be played for four or a single player.

The world, which automatically becomes your world as the player, is no longer as peaceful as it used to be. The demon army “Kazeros” is out to unless hell on humans. Now the human race is counting on you to end the chaos by putting the demons in their place. In this game, you will have to battle monsters the size of a building. So, get ready for the action!

If you are a fan of games centered on wizardry, there’s a higher chance that you will like the Wizard of Legend. As the name implies, the game involves the use of magic. But keep in mind that there are many hurdles you need to cross to become a Wizard of Legend. It’s no small feat!

In this game, you will engage in magical combat and a fierce one at that. No sword, no men, just you and the plethora of dungeon crawlers, whose mission is to destroy you! The quick use of magic makes this game more engaging, as you can combine more than one spells to unleash hell on your enemies.

In the Path of Exile, Wraeclast, a once peaceful region, becomes a den of criminals and outcasts. As the protagonist, you will come across these criminals, unwanted individuals, and rejects. So your mission is to stay alive in this cruel world, by making good use of your fighting skills.

Excitingly, your first few engagements with the enemies or those that pose a threat to your life would be with your bare hands. As time progresses, you will have various weapons to help destroy your enemies. Path of Exile has an exciting storyline and fast gameplay. So, it’s one game you will enjoy spending your time playing.

In addition to immersive gameplay, Grim Dawn boasts impeccable graphical quality. These two features, combined with its fast-paced action, makes the game a joy to play. The storyline is also impressive, and there are loads of amazing quests waiting for you to explore.

This game is set in a fantasy and apocalyptic world, marred by chaos. The human race is in severe danger, and any hope of restoration rests on your shoulders. Trust has become a hard commodity, with every man to himself. Your quest in this game can be of any form. You can set out on a journey to gather valuable resources or make up your mind to fight the raging enemies. You can craft your weapons from available resources and recruit men into your league of extraordinary fighters, too. The choice is yours to make!

This Titan Quest video game is a sequel, and offers a whole new dimension, compared to the first released Titan Quest. It involves an epic battle between good and evil, with you, the protagonist, being the good guy! The quests to explore are numerous. There are new items to collect, skills, and ten special characters available to you to make a choice.

In this hack and slash RPG video game, there’s an opportunity for you to form alliances to fight against your fierce enemies. It’s time to finally put a stop to the evil reign of Hades and everything that has to do with his devilish reign. So, hit the start button and start your journey in this epic action video game.

Sacred is one of the tops and highly engaging games on this list. We can also not forget to mention its superior quality visuals and gameplay. It involves action and adventure, loads of them! The storyline of this game makes it enticing to play and even watch others play.

Set in the world known as “Ancaria,” a fantasy world where an unstable substance (T-energy) binds everything. This T-energy must be kept safe. Otherwise, things could go wrong. So, the duty of guiding it was entrusted into the hands of the Seraphim, who got tired and gave it to the High Elves. From that point onward, Ancaria lost its peace, and the T-energy started killing the innocents, following the mismanagement of the substance by the High Elves. Your mission would be to stop the T-energy and ensure there’s peace between the disintegrated High Elves.

The time has come for you to take up your armor and protect a priceless jewel, a sacred stone! But it’s not just an ordinary stone; it’s a weapon in the hands of whoever wields it. Your fight will be against monsters whose mission is to get hold of this sacred stone.

Set in a unique world called “Horodyn,” Lord of Arcana is RPG, adventure, and action-packed video game. It boasts a crisp visual quality and mechanics that most games can’t match. Lord of Arcana can also be played by four persons, and offers players an opportunity to make their weapons. And besides these features, you will find other things you will like about the game. Just hit the start button and start playing.

As the name implies, Magicka 2 focuses on the use of magic and other sophisticated weapons to decimate the enemies. In this game, your enemies are fierce and skilled. So, you have to be ready for the battle. It’s a fantasy, adventure, action, and of the hack and slash kind of game.

The game also gives you the option to play alone (singleplayer) or get into combat with the other four players fighting alongside you. Plus, you can choose any robed wizard of your choice to take them the many creatures lurking around.

HellSign is a top investigative role-playing game. In addition to its stunning graphic, the idea and storyline all make sense. You will be fighting against demons, monsters, and other evil creatures whose primary mission is to cause destruction.

As a hunter, you will have to fight and kill the ghosts and demons lurking around. You will also have different weapons powerful enough to take down your enemies. Still, you must use your investigative skills and available evidence to know a bit more about what you’re up against. With the right information, you will be able to carry along the ideal monster-hunting weapons for the mission.

With time travel and character customization perfectly combined, Last Epoch stands as one of the best games like Diablo, on this list. It’s one of the games that ensure endless replayability, which is as a result of its randomized loot, continued development, loads of skills and classes.

Last Epoch is set in a world called Eterra, a home filled with secrets, threats, and fractions. So, you will not only be traveling through time but crafting epic gears and also slaying monsters.

This RPG video game called Vikings will keep you engaged and yearning for more! It’s an action-packed game, filled with beards, blood, and loot. The controls of this game are smooth, and it boasts a top-rated graphic.

Vikings’ combat is also brutal and engaging. In short, it will grab your attention better than the famous Diablo ever will. Battle the hungry beasts of Ragnarok and monsters and be ready to deal with the bad weather.

Victor Vran is another game that’s not only aesthetically pleasing to the eyes but features entertaining combat. It offers a unique customization option, where you can create your own Victor Vran. You will find all the items required to create it.

There are a series of weapons, outfits, destiny cards, including demon power. So, it’s a game that lets you decide the best way to play it. You can unleash unusual moves, dodge, jump and combine skills or weapons in your arsenal to decimate your enemies.

So these are the 15 games like Diablo. You can o through the list and make your choice. Diablo is a top game, one that many cannot get out of their head. The game is quite addictive, but there comes a time when you want to try something different. So, if you are seeking a top Diablo alternative, then you can check out the options on this list.