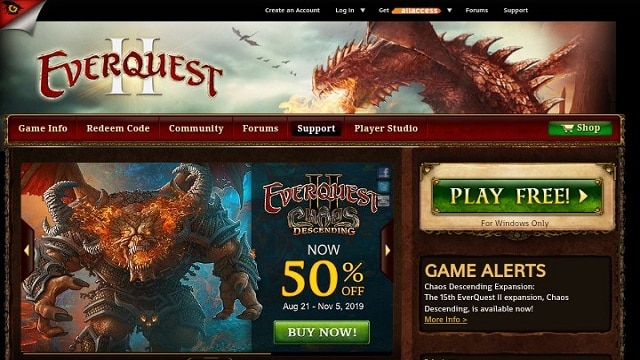 Runescape is an incredible massively multiplayer online role-playing game. It is popular because it gives users maximum pleasure they may not find while playing another game. The platforms that support this game are Linux, Mac OS, and Microsoft Windows.

Perhaps, you don’t know much about the exciting features in Runescape. The most impressive fact about Runescape is that it has an element of fantasy. All the characters and the theme of the game portray The introduction of intricate quests, and medial visuals perfectly demonstrate this.

Now, you can try any other game if you don’t like Runescape anymore. Other games have similar style, gameplay, and characters. This blog post covers the best games like Runescape. Let’s take a look at them.

Serenia Fantasy is one of the games that belong to the massively multiplayer online role-playing game niche. It comes with additional features absent in Runescape and a 2D style. Several reviewers have described it to be unique and better than other similar games.

One of the features that would spark your interest in the game is the excellent interface with attractive visuals. Since Serenia Fantasy is unique and more adventurous them Runescape, we recommend that you watch tutorials of the game on Youtube.

Rift is one of the best rivals to Runescape you would find interesting. It is a fantastic, massively multiplayer online role-playing game that combines fantasy with a medieval setting. Rift is set in the world of Talera and features six elements, namely: Fire, Life, Earth, Air, Water, and Death. And as the player of the game, you have multiple abilities according to the element you activate.

Rift features the seemingly perpetual war between the Defiant and the Guardians. One of these factions supports science, and the other is against it. You will see the storyline explaining war for the beginning of the game to the very end of it.

World of Warcraft is an excellent, online game from the Universe. It is an addictive game where millions of players compete by comparing their performance. World of Warcraft is not challenging to play by new users. You will always see instructions icons on opening the game. This feature makes World of Warcraft a suitable alternative to Runescape you can try.

An exciting thing about it is that you will activate a hero upon starting the game. Throughout the game, you have many chances of boosting the level of the hero to up to 90. As you fight enemies and progress to higher levels, you earn money. And you can spend the money on weapons and other essential items.

To choose EverQuest 2 means, you love to see character customization in fantasy games. That is one of the most attractive features you will see in the game. EverQuest 2 follows the earlier release, which has a similar plot and feature. It is undoubtedly an excellent alternative to Runescape.

Unlike many other games, EverQuest 2 is entirely free. You can spend time enjoying this game without running of credits. The setting of the game is in an imaginary world of Norrath. In the gameplay, you have to engage in questing and exploration. Further, you are free to explore different methods and customization features to win.

Drakensang Online is on this list because it has impressive features and intriguing gameplay when you start playing the game. It is a fantastic game in the MMO genre, with excellent design by Bigpoint Games. Users of this game can switch to different modes depending on their familiarity with the game.

Additionally, the inspiration behind Drakensang online is the Diablo series. You will have to fight creepy monsters on the map as you progress through the levels. The classes in the game are Rangers, Knight, Mages, and Dwarves. Each class has specific powers and abilities.

Dragon Nest is probably the most intriguing game on this list. Because of its fascinating features, it is popular among gamers the world over. The publisher of this game is Nexus, and the fantasy design was by Eyeidentity. The release of the Chinese version of Dragon took place in 2010 and the generic version in 2011.

There are many side paths in the gameplay of this game. In the side paths, you have to fight dangerous monsters and fairies to find artefacts. The combat style in the game is unique in that it allows users to launch face pace attacks. This style keeps fun of playing the game alive. You can also compete with other players on this game in the player vs player mode.

DarkEden is the longest game in the list. Similar to Runescape, DarkEden is a massively multiplayer online role-playing game. Your primary aim in the game to defeat slayers and vampires. You will find this game exciting and intriguing once you understand the theme of the game. Also, the combination of old and contemporary visuals makes the gameplay classy and impressive. The visuals capture the details of combat and survival.

You have to choose a class once you start playing DarkEden. There are many exploration tasks and quest operations in the game. It requires that you select a particular mode with unique skills and abilities.

Another game worthy of mention in this list is ArchAge. It resembles other Runescape-like games in many areas. ArchAge has fantastic content that makes it one of the famous, addictive games online. This addictive content implies that you would spend hours playing the game without experiencing boredom.

You are free to customize the characters of the game when you start playing it. The independent progression approach of the game also makes it choosing a path easy. As you win more battles and get to higher levels, you gain more weapons. You would also learn more skills and be able to choose a clan or gender.

Stendhal spots a different approach and design. It is one of the MMORPG you can find on the internet or buy in the software market. According to reviewers, Stendhal has the most extended storyline. That implies that you have to reach more levels to complete the game.

The tasks you have to complete in the game revolves around finding hidden treasures. You will enjoy its exploration feature, which contains an excellent questing process and profound approaches. You may find yourself falling in love with Stendhal faster than you imagined because of its fantastic graphics.

Guild Wars 2 is the second release in the popular Guild Wars series. As its name suggests, it follows the first release that sets the pace. With Guild Wars 2, you will get all the flexibility that you need. You are free to switch levels and still retain your skills and loot. You can also compete with other players, whether they are at a superior or inferior level.

Also, a feature you will enjoy is the similarity in the classes in the game. Each class has multiple abilities, but they can perform some tasks specific to others. For example, the healer can also fight. And the fighter can also heal.

Without any doubt, Villagers and Heroes is an easy and fun MMO game that shares some similarities with Runescape. It is one of the games that come with natural settings and themes. As a consequence, Players of Villagers and Heroes call it A Mystical Land. You can never experience boredom with this game because it has an exciting storyline and in-depth moments.

In the gameplay, you can easily create an avatar with many customization features. You are to explore all fields and progress to higher ranks. You can choose any of the classes and complete the missions. Interestingly, you don’t need to have a strategy to win and get to the next level.

One of the things that qualify Albion Online to make this list is the inclusion of many sandbox features present in Runescape. Now, apart from this, it is different from other games in the MMO niche. More so, the plot, setting, and character in this game would make you stay glued to your computer all day.

With Planet Calypso, you can enjoy two worlds simultaneously. It combines the typical Earth scene with imaginary features. Further, the game combines the elements of nature like rivers and mountains and imaginary elements like fairies. To your delight, you can convert the in-game currency of Planet Calypso to real money.

When you open this game, you have started a journey. And in this journey, you are free to explore zones and territories. Each territory has loads of excellent features and tasks you have to complete. Defeating all enemies and competing tasks is easy if you make good use of your weapons.

If you crave the MMO experience on a browser-based game, Salem is the best game like Runescape to try out. Playing this game is entirely free. The activities you will perform in the game revolves around exploration and crafting excellent weapons.

In the gameplay, you will need weapons to successfully resist attacks from your enemies and overpower each of them.

Additionally, every player in the storyline is a traveler who left his safe home country to live in a hostile environment. Therefore, you have to create your empire and defeat enemies in the wildland.

Neverwinter is an excellent MMO game that is similar to Skyrim. If you love D&D games with role play features, you will enjoy Neverwinter. It features colorful graphics you would like to see again and again. You can choose any of the eight classes available in the gameplay. Each of these classes has unique powers and abilities.

Now, depending on the mode you choose in the gameplay, you launch attacks and defeat enemies. It is easier and faster to do this in the battle mode than others. However, you will be able to take some actions without switching modes when you get to higher levels. At these levels, you will be able to fight in the battle mode and also rest as in task mode.

We have covered the best games like Runescape, which empowers you to demonstrate your gaming skills and compete with many players all around the world. It is fun and exciting to enter the virtual world on each gaming platform and explore all multiple options.

There are a lot of features you would love about the games as you install any of them. You already have a glimpse of what you will enjoy in each game in this article. You will get more when trying them out.