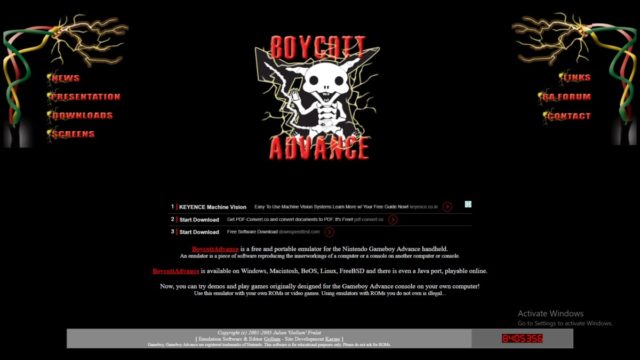 The peeps born in the 1990’s love the GB. Solely for the fact that it offered a unique gaming experience and over 500 titles to choose from. The GBA released after few years offered much more and even better titles. Kids those days went gaga over the thought of owning a GBA.

If you ever had the thought of recreating those memories from your child, here is your chance to choose from the list of ultimate GBA emulators. These emulators will allow you to play all your favorite titles on your PC. TIme to take a look at the list below to dive into your childish past.

One of the best GBA emulators available now, BoycottAdvance is one of a kind. It works really well with almost every version of windows. Along with all the features and sound simulation, it lets you play all the GBA games. Stability is yet another factor when Boycott Advance works well with. The Boycott Advance even allows joystick compatibility. The support for commercial games and also the ability to work in Mac and Linux makes this emulator one of the best in the market.

This emulator not only lets you play games of GBA but also other devices such as Visual Boy. The version M of VBA lets you play almost all the titles with much more stability. You can play both GB and GBC titles in a single emulator window. Taking a screenshot of your gameplay and sharing them is much easier in Advance-M. For Multi Rom support and great stability, Visual Boy Advance-M is definitely worth the try. The only lacking feature is that it supports on Windows OS.

This one is another popular GBA emulator when you need seamless rendering. One of the few emulators that provide multiplayer gaming feature, NoCashGBA is yet another top emulators on the list.

NoCashGBA has the ability to work as an emulator even for Nintendo DS which another great bonus. This emulator is free to use and also Pokemon lovers are going to get addicted to it because it has such good connectivity features. For multiplayer connectivity do not look at anything else because NoCash is the ideal emulator.

Everything you ever need for emulating is offered in a single package by RascalBoy. Over the course of time, RascalBoy has acquired even features such as multiplayer gaming and support for a wide variety of games. The retro multiplayer GameBoy games work very well on this emulator.

Its support for commercial titles is yet another brownie point for RascalBoy. If you are the type of gamer who loves to try out the paid games, RascalBoy is never going to let you down. More features are going be added to it soon in the future. The only drawback of RascalBoy would be its resource-hungry requirements.

This emulator is quite lightweight when compared to most of the other emulators out there. The BAT is never heavy on your system and does not need many resources also. The rendering quality is top notch and even the commercial titles can be well played using the BAT. Even though it needs an original BIOS file to set itself up, BATGBA makes enough sense to be used.

The BATGBA works well on almost all the versions of windows. You can customize the keyboard and mouse also according to how well the game should be played. The installation process is also very short with only a matter of few seconds. You will not be getting cheat support along with BATGBA which is a disadvantage, Also some users have reported of crash issues. Might want to take a look at that too. If you want an extremely light emulator to manage your games well, BATGBA is the GBA for you.

A GBA emulator that is available on almost all the platforms would be the RetroArch. It allows you to emulate different types of consoles and systems that existed from long back. If you are the type of person who is looking for an emulator that allows you to play Playstation as well as GBA games, you can very well give this one a try. RetroArch is simple to set up and also is well updated during regular time intervals.

RetroArch even allows you to play games that were released for obsolete versions of GBA. A complete Retro-gaming experience is delivered by RetroArch and it runs very well on Windows, Mac and Linux. A Multi-Rom designed to satisfy even the geekiest of the gamers, RetroArch is here to stay.

Compatibility issues will no longer be a menace for all the GBA gamers out there. Other than windows OS, it lets you install the software also on Linux and Mac too. The Playback of the games is quite stable in mGBA. There are no awestruck features in this emulator but it can be easily installed without any hassle and gives a great performance.

In terms of the power of process and being lightweight mGBA is worth it. One of the most taken care of emulators in the market would be the mGBA. If you need only the GBA games, then mGBA is the best choice. The ability to override the game and also enable ROM patches is facilitated in mGBA. Lack of some advanced features is basically what mGBA lags behind with.

This is also one of the popular multi-system emulators to try out. A great merit of Higan Emulator is the full-screen mode which allows a totally different gameplay experience. A better sound performance is also given out by Higan.

The developer has stopped the update long time back. But the version that is till date being used is known to be stable with little to no crashes. Also, the configuration options are great with Higan emulator. It is indeed an ideal choice for all gamers. Higan EMulator supports good colour production and also multiple consoles. A drawback can be associated with sound lag in some devices.

It is another lightweight GBA emulator that does not come with any intricate eye-catching features. But it gets the job done, i.e emulate the game without any glitches. It gives a standard gaming experience which is smooth and fun. One of the widely used and famous GBA emulators out there would be the DreamGBA.

Without the addition of external items, you can be assured of a smooth performance. The only thing lacking would be the multiplayer gaming facility. For gamers who do not need many fancy features but wants solid performance, DreamGBA is the ideal emulator available.

As you have seen from the above list, all the GBA emulators discussed are good one way or another. Each of these has their own pros and cons. It depends on what you really need that matters when choosing the best GBA emulator for your needs. Some of them are feature rich while others are simple but offers great stability. On the other hand, some of them offer multiplayer facility while some do not. so its all mix and match of features.