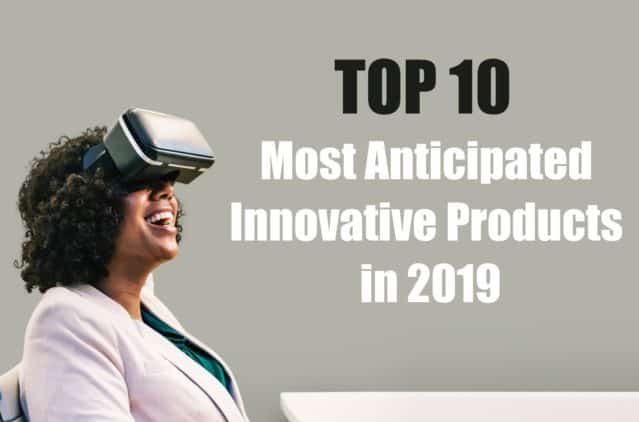 In the new year, a majority of us look forward to a fresh foray of innovative new products that the year will bring for us. As millennials are taking over the world, the tech-savvy generation is in constant search for new and trendy products to keep them updated with the latest innovations and shop more.

Whether it will be the big players or the recent start-ups, the year 2021 will gradually unfold which product steals the show with its cutting-edge technology and who will be out of the league. While we patiently wait for the game changer to arrive, we have compiled a list of top 10 most anticipated innovative products in 2022:

10 Most Anticipated Innovative Products in 2022

Those who have been patiently waiting for the Mac Pro ever since its previous release four years ago, the year 2019 will be your year. With Tom Boger, Apple’s senior director of Mac hardware product marketing confirming the news of its launch in 2019, a lot of assumptions have already started surfacing with the expected product features and specifications.

Apple’s internal team, called the Pro Workflow Team, is currently working hard to ensure that both the hardware and software of the upcoming Mac Pro meets the consumers’ varied needs from graphic designing to film editing and animation. In addition to this, it will be interesting to see Apple’s major shift from Intel chips to its own ARM-based processors in its new Mac Pro.

South Korean electronics giant LG recently announced its partnership with the telecom provider Sprint to introduce its foremost 5G smartphone in the United States in the early 2019. As per John Tudhope, Sprint’s director of product development, “the new LG smartphone will be customised as per Sprint’s planned 5G network and will be compatible with T-Mobile only on that carrier’s existing 4G networks”. Although there is no confirmation about the product’s exact specifications, it is confirmed that the product will be supported by Qualcomm’s Snapdragon X50 modem.

Marcel Campos, Asus global PC and phone marketing senior director, announced the launch of a real-time AI-powered laptop in 2019. He further added that the laptop will be equipped with two screens that can efficiently predict the way the user wants to use the laptop and will supply the user with a virtual mouse and keyboard in their absence.

The laptop can even predict the movement of the fingers and shift its virtual keyboard to offer the user the most delightful experience. So, if you have plans to buy a new laptop and want to enjoy new features, you can consider the dual screen laptop from Asus.

An upgrade to its first version of Hololens, Microsoft is prepping up for the release of its Hololens augmented reality (AR) headsets in the early 2019. These headsets will be ideal for people seeking to use AR in manufacturing and for developers trying to get their hands-on AR.

The next generation Hololens device is predicted to be powered by Intel chipset which will support artificial intelligence with on-device processing which will make AR interactions more lively.

The pioneer of virtual reality Oculus is all set to release its latest middle-grade virtual reality (VR) headset in the first quarter of 2019. The headset will have a brand new design. This standalone headset will be free from bulky snaking cords and will take the experience of VR gaming and interacting at a higher level. The wireless headset will be powered by Qualcomm’s latest chips and will offer an inside-out tracking with its highly functional camera setup.

Following the innovations by Tesla and the concept of implementing artificial intelligence in motor vehicles, General Motors is all set to roll-out its self-driving car Cruise AV without the traditional controls such as pedals and the steering wheel in 2019. The car will be a fourth-generation version of the fully electric and driverless Chevy Bolts vehicle.

With the company designing the complete vehicle from the ground up with complete automation, General Motors claims that the vehicle will be built to operate safely on its own. As the company still awaits its approval to deploy the car, we hope this new-age fully automatic car proves to be a hit in 2019.

If rumours are to be believed, then Microsoft’s ultimate gaming console Xbox is lined up to be released in 2019. With console manufacturers constantly trying out new systems, making a prototype and internally testing the upcoming Xbox, Microsoft is ready to set a benchmark in the console gaming arena.

Well, with Playstation 5 also set to release next year, it will be fun to see if the new Xbox will knock off its competitors and meet the expectations of its admirers. Regardless of the outcome, the competition between the two consoles will only benefit final consumers.

Considering the complexity of the wired patient monitors, GE Healthcare has been developing wireless monitors for the past three years and they are expected to launch in the early 2019.

See also  When Will Virtual Reality Be Possible?

If you are planning to upgrade your old TV with a trendy and innovative TV, then the miniature version of Samsung’s The Wall will be an ideal choice for you. Samsung is gearing up for the debut of its 73-inch luxury model TV and 146-inch commercial TV which will consist of the Micro LED technology for creating any size of the array from tiny modules of LEDs.

With the smaller version to be only 1.2 inches thick and the larger one to be 3.1 inches thick, Han Jong Hee, President of Samsung’s visual display business said that the price range of The Wall will be lower than expected.

As Google clears the rumours about releasing its new Pixel watch this year, it is anticipated that the watch will be released sometime in 2019. Miles Barr, Google’s director of engineering for Wear OS suggested that “Google will not be releasing a smartwatch this year as the company has decided to focus on improving the wear OS and is emphasising on its partners”.

As Google is partnering with other companies to improve its smartwatch’s hardware and design, it will be interesting to see its upcoming version. However, we have to wait for more details on the schedule of the release.

In summary, the year 2019 is expected to present many new innovative products to consumers. We have provided a list of top ten most expected consumer products from different industries. As the review shows, there will be a continuation of the tendency to implement the artificial intelligence technology, virtual reality and augmented reality in consumer products. Further development of these technologies will change our lives and how we interact with the world around us.

Anna Clarke is the owner of online writing company 15 Writers. She is a successful entrepreneur with over 20 years’ experience in both freelancing and academic writing industries, specialising in Business, Economics, Finance, Marketing and Management.