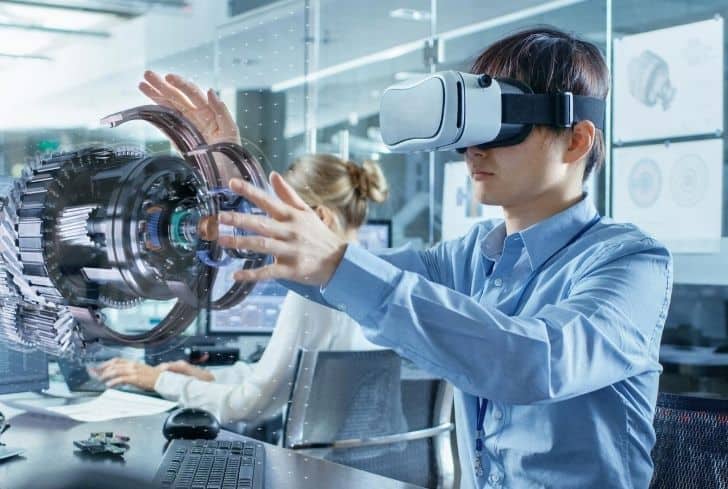 Virtual reality can be defined as an experience that is simulated. This experience can be similar or completely different from the real world. A person making use of virtual reality equipment will be able to look around the virtual world, move around in it, and interact with its virtual features and items.

Simulation-based virtual realities give their users the impression of actually performing an action by taking input from the users’ actions and giving back the corresponding cues to the user.

A common example is the driving simulator, which gives a person using it the impression of driving the actual type of vehicle selected, by predicting the vehicular motion that would be caused by the drivers’ input and feeding back the corresponding motion, visual and audio cues to the user. Another example is a cooking simulator.

For projector-based virtual reality, the modeling of the real environment plays a crucial role. This category of virtual reality is used in robot navigation, construction modeling, and airplane simulation. To generate realistic models, it is very vital that acquired 3D data must be accurately registered.

Desktop-based virtual reality displays a 3D virtual world on a regular desktop display but does not make use of positional tracking equipment. First-person video games make very good examples of this category. In this form of virtual reality, there is no sense of peripheral vision.

What is Augmented Reality?

Augmented reality can be defined as an interactive experience of a real-world environment in which the objects residing in the real world are enhanced by computer-generated perceptual information. This enhancement can be across various sensory channels like visual, auditory, haptic, olfactory, and somatosensory.

Augmented reality systems layer virtual information over a live feed gotten from a camera into headsets, smart glasses, or through mobile devices. This layering gives the user the ability to view 3D images.

Augmented reality is any system that carries out three basic features; the combination of both the real and virtual worlds, interaction in real-time, and an accurate 3D registration of both virtual and real objects.

The major value of augmented reality is the manner in which the data from the digital world is displayed through the combination of different immersive sensations. This digital display is blended so well into one’s perception of the real world that they are then perceived to be natural parts of the environment.

Is Virtual Reality and Augmented Reality the Same?

Virtual reality and augmented reality are not the same. They are related but very different. They have similar designs in the devices they use but both realities accomplish different things and they do these in very different ways.

Both virtual reality and augmented reality make use of virtual objects but they differ in the method with which they use to present these virtual objects to their respective users.

What is the Difference Between Augmented Reality and Virtual Reality?

Augmented reality technology is designed to allow completely free movement of its users while virtual reality confines its users to a more limited space.

Which is Better Virtual reality (VR) or Augmented Reality (AR)?

In 2016, augmented reality took a more center stage globally with the release of Pokemon Go. The viral sensational game got pokemon out of your device and into the world. This was the first major example of augmented reality being able to find large market acceptance.

Virtual Reality: The best method of traveling to other worlds

For gaming and creativity, with the addition of touch controllers, a whole new dimension of immersion has been provided. Using a paintbrush or a sword in the virtual world becomes a natural action. Applications that are well implemented allow users to stay immersed with the use of nothing more than their touch controllers.

Augmented Reality: The best method of bringing other things to you

Populating your surroundings with unusual décor or with future techy holograms is made possible using augmented reality. It is also an amazing way to annotate real-world scenes with additional data. These additional data can be anything from additional information about an object you are looking at to service instructions about an elevator that needs repair.

The latest augmented reality devices have made a great leap in placing objects in the real world. The shortcomings of both the real world and virtual world light rays not being in sync have almost been overcome.

These light rays initiate neural signals in the visual part of the brain in order to create unbelievably believable experiences.

Both virtual and augmented realities have their place depending on whether you would like to visit new worlds or bring objects not normally seen in the natural environment to you. However, there is an option that takes both of these realities a step further:

Mixed Reality: Combining the best of both worlds

However, at the moment, there is no device that does an excellent job of combining both realities, as they involve a tradeoff that favors one reality or the other.

Technology is advancing in both realities as every year new technology is rolled out. Therefore, there is hope for the future of both being accepted by the mass market.

Virtual reality is most common in entertainment applications like video games and 3D cinemas, Ne generation of headsets like the Oculus Rift, the HTC Vive, and the PlayStation VR have set off new waves of application development.

Augmented reality has been used to help in archaeological research, in visualizing building projects in architecture. It finds application in urban design and planning where it is used to create augmented reality maps and buildings that are projected to be viewed by environment professionals.

In Industrial manufacturing, augmented reality is used to substitute paper manuals with digital instructions thereby reducing the mental effort required to operate machines. It is also used in commerce and marketing to combine print with video marketing.